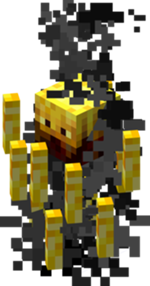 Blazes, named for their fiery disposition and attacks, are one of the four Nether mobs. Their attacks are hitting the player and launching fireballs. These fireballs, unlike Ghasts', do not explode. Blazes tend to spawn in large numbers, and guard Nether Fortresses. They spawn from actual spawners, which can be destroyed to prevent more appearing. In Creative Mode, Blazes are handy for burning down Jungles looking for Jungle Temples. They are necessary for beating the game, as their Blaze Powder is necessary for making Eyes of Ender. Blazes also drop the most experience in the game aside from the bosses.

Blazes are tough to defeat: their large numbers and the speed of their fireballs coupled with their levitating make them a formidable opponent. If you get too close, they will hit you for about two hearts of damage, but their real power is their fire. They will periodically shoot three fireballs at any attacker, but more like a shotgun than a precisely targeted weapon, as they sometimes miss even if the player is standing still. Snowballs help when battling, as they are made of water and will damage the fiery Blaze.

Blazes are yellow, flying mobs with 12 golden yellow rods rotating them at high speed. Their head is a small cube; the top half is golden orange while the bottom half is a dark maroon. Blazes also emit fountains of smoke from all around their body.

It is unknown what motivates Blazes to attack. However, their metallic damage-taking sounds and mechanical breathing point to the fact that they may have been planted in the world by a higher intelligence and are mechanical.

A Blaze and a Blaze spawner